Fathom Gallery is a multi-level, flexi-use event space located on 14th Street in the heart of Logan Circle. The Gallery combines the classical elegance of old 14th Street with a refreshing, modern simplicity. We offer our gallery space to the local community as a venue for art shows, cultural exhibitions, fundraising events, non-profit cocktail receptions and special celebrations. We have hosted events for The National Trust for Historic Preservation, National Geographic, Google, and many others! Recent exhibitions have featured artists Ned Dishman, Nima Veiseh, and Stephen Benedicto. You can see a full list of upcoming events as well as past events on our Community page. 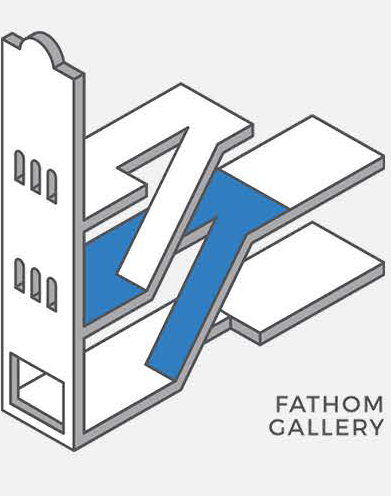 The Greater 14th Street Historic District serves as one of the city’s main artistic and cultural hubs. It spans roughly 24 city blocks and lies within the boundaries of L’Enfant’s original city plan. In the years following the Civil War, the district experienced rapid growth that introduced public sewer systems, street grading, and the first streetcar lines in the area. The first commercial and residential buildings represented the area’s diverse social makeup, and they drew on a number of architectural styles, including Second Empire, Queen Anne, Romanesque, and Victorian.

With the advent of the automobile, the paved roads of 14th Street became popular with dealerships and garages, and 14th Street gained the nickname “Automobile Row.” As a former brake shop, Fathom Gallery has maintained much of the building’s original architecture and signage.

The 1968 riots marked a low point in the area’s otherwise pleasant history. Sparked by the assassination of Dr. Martin Luther King, Jr., the riots caused citywide devastation. The 14th Street you know today is a result of the local community’s effort to reestablish the area as a creative and cultural hub.

Our location on 1333 14th Street was renovated in 2006 by proprietors Bill Fischer and Drew Mitchell. In 2015, the prominent 14th Street address got another mini-makeover when it welcomed Slipstream to the main level, a local craft coffee and libations hang-out. In 2022, Fathom Gallery added an additional location at 1351 Wisconsin Ave in Georgetown. The Georgetown venue is a renovated theater that still has its original marquee. 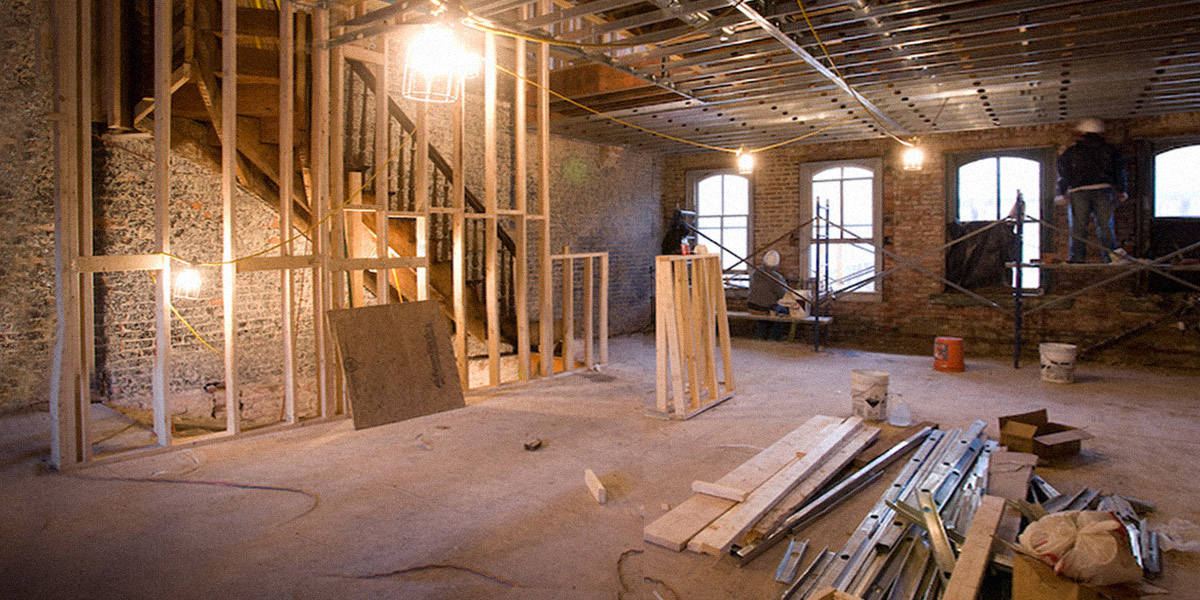 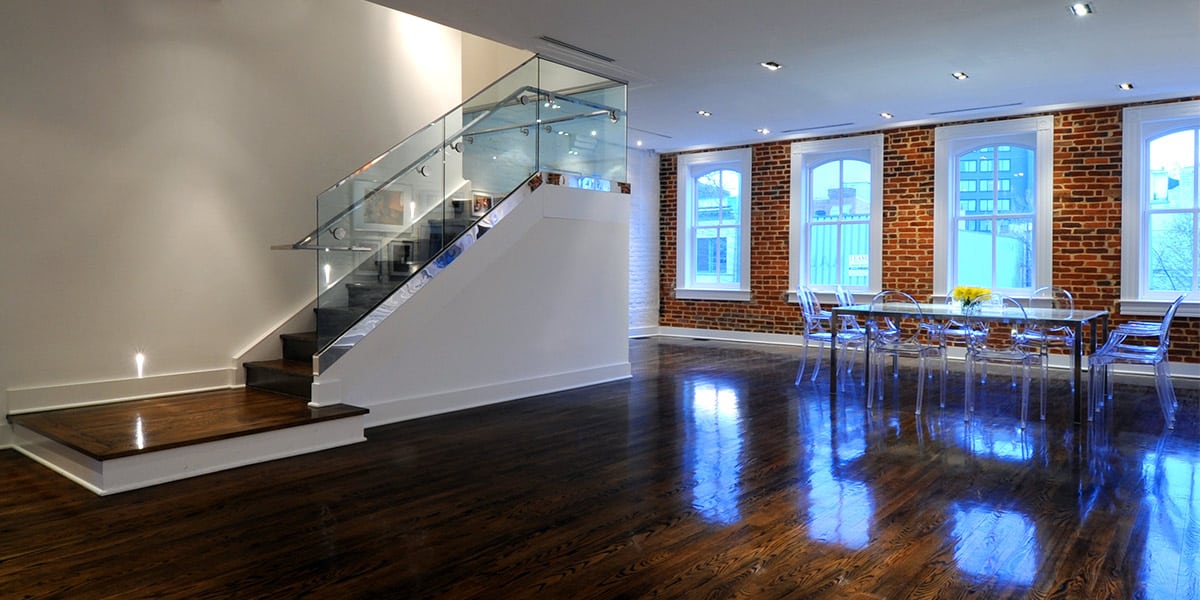 We’re in the news! We love when our space is shared with the community. Fathom Gallery has been featured in Snippet and Ink, Style Me Pretty Living, Capitol Romance and more.

I worked with the Fathom event planners to organize my company's annual holiday party. In our search, we were looking to steer away from a generic bar event to mix the party up. We were looking for a unique space that accommodated a 3-hour, continuous flow of about 100 people. The gallery space was the perfect size for our event and the event planners at Fathom were incredibly helpful every step of the way. The outdoor space was the icing on the cake. We rented 2 outdoor heaters from Fathom which allowed for guests to stand/sit comfortably outside for the entire night. The small touches in the gallery (ghost mirror displaying our company logo, white board cabinets in the kitchen/bar area) really added to our event. I would absolutely recommend this space to anyone looking to host an event and look forward to hosting events in the future at Fathom!

We could not have been happier with Fathom Gallery, where we had our wedding and reception on 10/25. The venue was a perfect for the size of our group (approx. 80 people), and provided a unique mix of classic elegance and modern style. We held our wedding outside, on the venue's roof deck, which gave the wedding a distinct urban feel (which was perfect, since many of our guests were traveling from out of town), and held the reception both inside (in the gallery) and outside (after venue staff quickly took up folding chairs and set the deck for the reception). The staff could not have been more accommodating. The website advertises Fathom Gallery as a "flexi-use space," and it was exactly that: a blank canvas which we could make our own. It also came at a great value, and Emily (the venue's representative) was incredibly kind and professional.

If you are looking for a unique DC venue that will wow your guests and make your wedding one of the most memorable, this is the place to do it. If you are a bride on a budget, you will seriously save by choosing Fathom. After the rental, you really don't need to spend much on decor because the venue has so many lovely small touches, all you need is some bud vases and you are done. Our wedding day was perfect and it's because we chose to do it at Fathom!

The lighting is bright and flattering, the bar is accessible and practical, and the rooftop is just divine. It's nearly twice as large as the inside space, so if you're planning to hold an event here, be prepared for your guests to spend the majority of their time oowing and awing at the outside surrounds. Would highly recommend this space to anyone and looking forward to attending my next rooftop soiree here.

Get in touch with us regarding any questions you may have about Fathom Gallery!

We want to hear from you!

Ways to make a statement at a Fathom Gallery weddi

The perfect place to say “I do” and the perfec

In case you missed it on our IG stories, we have s

Spring has officially sprung, and our spring kicko

Our rooftop flowers are blooming, and we’re buzz

Glammed and all done up, or clean and simple.. ge

With the weather warming up and Covid calming down

We had a romance-packed day yesterday here at Fath

They’re not a regular couple ➡️ they’re a

That “Friday in February when it hits 60 degrees

We received the full album from this stunnnning st

The gallery and rooftop tend to steal the spotligh

We love a commitment to a color scheme (or shall w

We know there are some quarantine babies on the wa

Share your email with us to receive information on exciting happenings at the gallery, invitations to our community events, and more!